Of the various delicacies found in the naturally rich earth of which we inhabit, some are beautiful, delicious, pungent, and gross. Others such as the Durian fruit are bit of some of the stated with a pinch of smelly and delicious. This southeastern fruit is notoriously known for odors that are described as many of people all over the world. Popularized by the internet, many have recordings of their experiences with this strange fruit, the awful smell yet unique taste has made for the publicity online.


Of the various delicacies found in the naturally rich earth of which we inhabit, some are beautiful, delicious, pungent, and gross. Others such as the Durian fruit are bit of some of the stated with a pinch of smelly and delicious. This southeastern fruit is notoriously known for odors that are described as many of people all over the world. Popularized by the internet, many have recordings of their experiences with this strange fruit, the awful smell yet unique taste has made for the publicity online.


1. The exotic fruit is native to Southeast Asia is countries such as Malaysia, Indonesia, and Brunei with Thailand as the major exporter of the goods at nearly 56% (800,000) of worldwide production.
2. The durian trees grow 90 to 130 feet tall and are 4 feet in diameter in strictly tropical conditions, for if the daily temperature exceeds 72 degrees Fahrenheit, the fruit will stop growing.
3.

Many orchards are covered with nets because the height of which they sprout at in addition to their shells and weight can kill or injure passer-byers as they fall. This is partially the origin of the King of the fruits title is has been assigned to.
4. The odor and taste of the fruit contradict one another, for the smell has been described by people of various sorts of smells ranging from smelly gym socks, to poop, to something nearly as specific as red onions that have been left in the cellar for years and then marinated in acetone.
5. The taste however is what adds to the interest of the fruit is a sweet treasure that is perhaps enhanced by the uphill battle that is escaping the horrid smell while ingesting the fruit. This struggle of consumption separates the consumers into mostly those who hate it was a burning passion and those who have found love. By the account of the British naturalist Russell Wallace who wrote of it in 1865. Within the fruit contains a couple of seeds and a creamy-custard pulp of almond flavoring for consumption. The acidity cannot be describes as acidic, basic, sweet, nor sour. It is peppered with areas of sweet cream-cheese, sherry-wine, onion sauce, and other miscellaneous dishes. The experience of enjoying the unique fruit is certainly worthwhile of your experience.
6. The smell is so nauseating that it has been banned by many resorts and services around the world, a Singapore sign shows the prohibition of smoking, drink and eating, flammable goods and lastly durians. Other Southeastern countries forbid against their consumption in public zones. Though available for purchase in the United States, the imported good is allow condoned if it is frozen during shipment.
7. A 1995 study found the cause of the smell to be the result of chemical compounds of esters, sulfur and ketones which generate a morning breath smell.
8. Thanks to the world wide web medium, this bizarre set of properties associated with the Durian fruit has gained a gathering or cult of people who praise and know of its existence, including, now you.
9. Demand for Durian is similar to other fruit and ranges between $5 and $10 per kilogram, with the average fruit costing $12 each.
10. Vitamins contained are Vitamin-C, B, and other minerals such as copper. It also contains high levels of tryptophan which acts as a natural sleeping pill and helps to induce sleep.
11. Nutrition is similar to that of other tropical fruits as a 100g sample contains 147 calories. A further breakdown of a 100g sample: 27g of Carbohydrates (21%), 5.3g fats (20%), 1.5g protein (2.5%) and 3.8g fibers (10%).
12. The durian is a dark green spiky covered surface that is to be handled with care as to avoid cuts and scrapes from the spikes.
13. Oddly enough already, there is speculation of the added fertility of women with the consumption due to the high levels of estrogen found in the durian fruit, with many doctors advocating against the combination of pregnant women and the Durian.
14. Research done by scientists at Japan’s University of Tsukuba found that the addition of alcohol to the mixture could be potentially dangerous as the fruit’s high sulfur content can knock out the ability of the liver to fight against toxins such as so.
15. A 2009 news story done by Jakarta Post reports of the death of 3 people after the consumption of durian and distilled spirits (an alcoholic beverage such as brandy, whiskey or rum) in a Bungo regency in Jami. 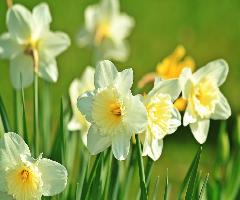 This article lists some interesting facts about the most loved flower on the planet..

Thank you for those information about Durian but I tasted this fruit once and never really liked it. Also, I have always hated the pungent smell of Durian and could not tolerate this smelly fruit when shopping for fresh options in the grocery store. But I know how lots of people love this fruit actually

Insecticides: Classification of insecticides (on the basis of mode of entry)

Five reasons why we need to protect trees

How to properly and easily graft a tree?...

10 Benefits of Tree Planting at Home...